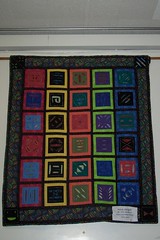 After last week's meeting, things can only get better right? Today I was delighted to find a box in my mailbox at school. When I opened it, I found two AWESOME books!

I had been contacted several months ago on Flickr and was asked for permission to use one of my photos on a kids book about insects. I was told that I'd be given photo credit and a copy of the book for allowing them to use the photo. I wrote back and said that as a teacher I'd be happy to give them permission, and then jokingly said that if they made a million dollars, I'd like 1%. The publisher wrote back that they couldn't give royalties, but how about TWO copies of the book. :) What a deal- I made TWICE what everybody else did.

They recently contacted me saying that the books were just about done and that they needed my address to send me my copies. The book arrived today, and I'm totally excited. Not only do I have my two copies of a book with my picture in it, but the book is TOTALLY COOL!!! This is a book that if I saw it while walking into Borders, I'd stop and pick it up and would probably end up buying. Not only are the pictures in it really great, it has cut-outs in their own little "envelopes" on eight of the pages so that you can assemble your own 3-D bugs!

The book really is lovely. Check it out! :) They haven't been released yet, but you can pre-order on Amazon.

Good grief, I haven't written in here for EVER. I just thought I'd write a quick note to chronicle something that happened in class today that has never happened before.

I was helping one of my 6th grade girls with a test that I had corrected and found to have a blank page. She was standing next to me and we were talking about how to use the information from a graph to find out how far it was to the epicenter of an earthquake. She suddenly kind of grabbed at her stomach and said, "My stomach really hurts" then kind of stumbled backwards, and kept going. I made a grab for her and quickly realized what was going on- as she passed out and slumped to the floor. I did lots of "Whoawhoawhoawhoa"ing and then a small series of "hey hey hey" as I gently shook her. She came to in a couple seconds and asked, "What just happened?" I said, "You passed out," and then asked her if she'd ever done this before, if she'd eaten breakfast, if she was dizzy or seeing any little black spots in her vision and if she felt like she was going to throw up. I sat with her on the floor for a minute or two after quickly pulling a bucket over "just in case" then I told her I'd walk her to the office personally, and that I'd "be her best friend" as I held her under her one arm and up by the other. We got to the office without further excitement, and she called home to get picked up. She called her dad who apparently was home with a stomach flu.


Other than her being pale, she seemed to be okay. Glad I grabbed her and kept her from smacking her head on anything! :) Hopefully I'll get an update on her if she isn't here tomorrow. 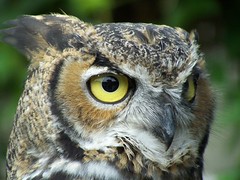 Archimedes
Originally uploaded by lisaellersf
The SF Zoo linked to my picture of their new Great Horned Owl! It's always nice to look through my pictures and spot good ones- and it's even better when others enjoy them as well. 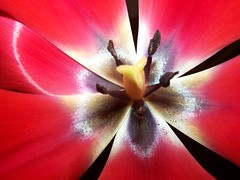 Tulip
Originally uploaded by lisaellersf
Just wanted to post this picture. :) One of my students gave me this tulip plant for Valentine's Day. Isn't it lovely?


I have no idea where the creatures came from.

One of Jett's resolutions this year is to do a daily doodle- (no silly, to DRAW!) and though I've not made a resolution to do one daily, I am wanting to do at least one a week. She has a couple friends from art school that are taking up the challenge too. There is a different theme each day chosen by one of us. I came up with the idea that Wednesdays should be "Wild Wednesdays" meaning that every Wednesdays we'll do a wild animal- or animal themed drawing. So... here's my animal for today:

On Monday the theme was "Jackalopes."

And THIS is why vacations are wonderful...
http://www.wired.com/science/discoveries/magazine/17-01/st_3st?npu=1&mbid=yhp

On Wednesday evening I was planning to stop by the house and grab some dinner and pick up the lighting books for the puppet show that Jett and I are in. She's a puppeteer again, and I'm doing the lighting for it. I left school and the plan was to just do a quick stop. Jett had gone over to Oakland earlier in the day and had put the dog we're fostering in the garage and left the door to the back yard open for her. Things were going pretty smoothly until I got to Mission Street. There I noticed some police cars, and saw a couple of police cars going zooming down Geneva with their lights going. Then I came to Pope Street, where I usually turn to go home. The street was blocked with police cars, and there was yellow police tape up across the entire road. I went up to the next block and it was exactly the same. By this point I was calling Jett and my heart was racing a bit.


The next block up I was finally able to turn. There were several cars that were doing the same thing, and when we got up towards my street everything stopped. I was finally able to turn, just to find out that the end of that block was also blocked with police cars and tape. An officer was motioning for me to move my car the other way, so I rolled down my window and explained that I lived on that street and was just trying to go home. He said that I couldn't go that way, and perhaps, if I parked, I could walk to my house.


So, I ended up parking down on Mission Street and walking back towards my house, when I was stopped at the corner by two more police officers. They asked where I lived, and when I told them, they said I couldn't go there yet. They said that if I waited, that I would hopefully be able to get home before too long. They told me that they were "looking for someone" and that a helicopter was on its way to the scene, and that a search was being done with dogs through the back yards and the entire area. I then let them know that we have a dog in the garage, and that the door to the back yard is open, and that anyone hopping the fence into our back yard would be able to get into the house. They didn't seem to care about this.


After about an hour, the one officer asked me what house I lived in again, and then told me that our next door neighbors' house had just been secured. She then called up to tell them that we have a dog on property and then proceeded to escort me up to my house. As I was walking up I noticed that the garage lights were on. That was fine with me. Feel FREE to make sure there isn't any body where they shouldn't be. Then I noticed that the studio lights were on, and then the living room lights. Then I saw the front gate was OPEN and that the bedroom lights were on. It was then that the officer (who was talking with her head piece) started saying things that indicated that the other officers HADN'T seen a dog on our property. An officer came out from my other neighbor's yard and said he hadn't seen a dog at the house. I went up stairs and saw the closet door open, and that pretty much every light in the house was on. Wulfie was sitting in the chair and seemed totally calm about everything. I started calling for Katrina and when I opened the door to the garage she came bounding up.


It was after this that the officer told me that there had been a bank robbery and that the suspects had been chased to this area, and THAT was what was going on. She left to head back to the corner, and I walked through the house seeing where the police had checked under the beds and in the closets. -It's a weird feeling, knowing that police officers went through your house- probably with guns drawn, searching the entire place. It was good knowing that I was home alone though. I wouldn't have wanted to be in the house alone if I hadn't known that everything really was safe and secure. A short while later, I grabbed the dog and the books and ran off for Oakland. I still managed to be able to do one full run through of the show before coming back home.
Collapse